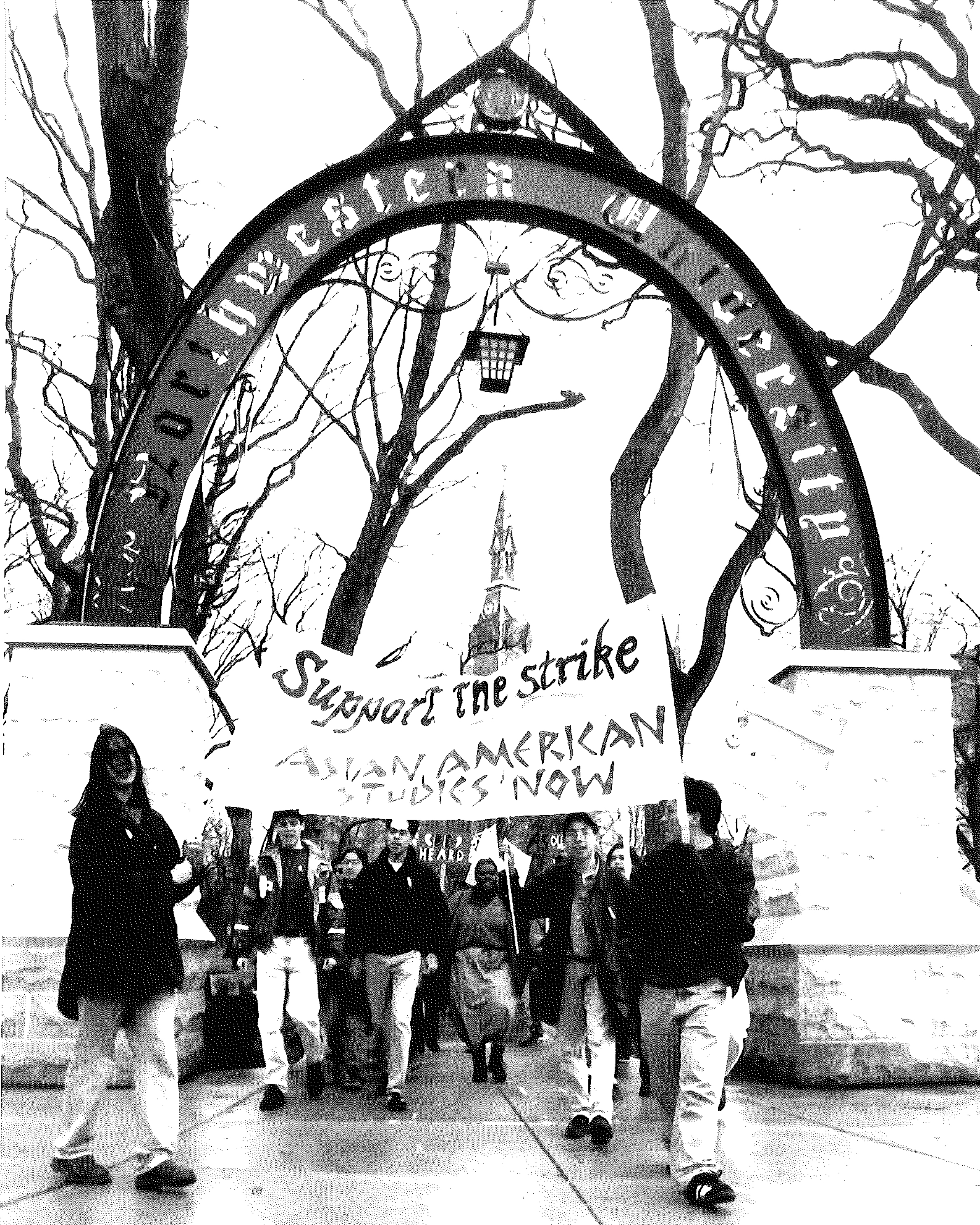 On April 12. 1995, 17 Northwestern students started a hunger strike to pressure the school into starting an Asian American Studies Program.

For almost a month, their actions shocked the campus, brought about the establishment of the department four years later and would forever be seared into collective Northwestern memory as an explosive but ultimately fruitful movement with a lasting legacy both within the school and across the nation.

This is their story. | By Yunita Ong and Ina Yang

Sumi Pendakur and her friends were frustrated. 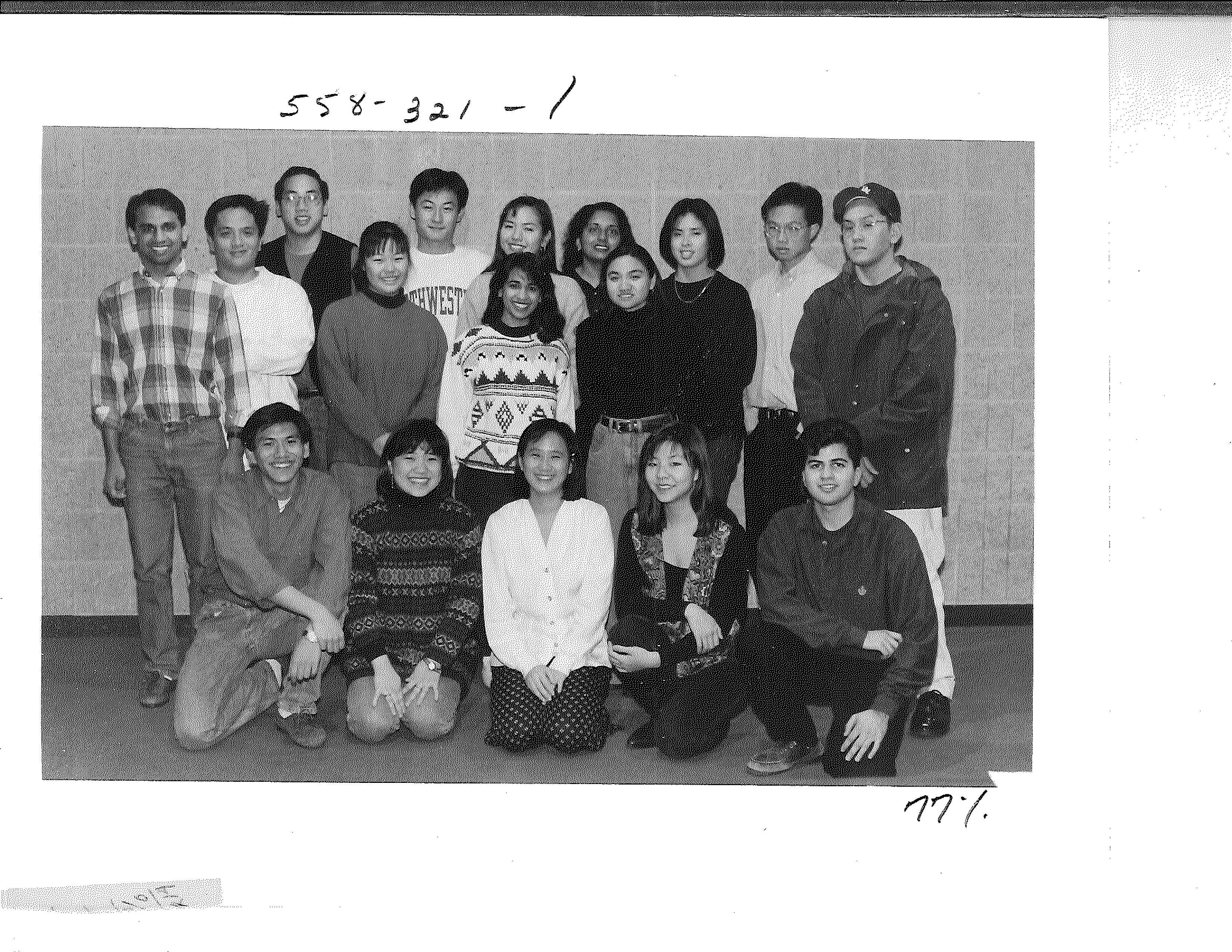 Members of the AAAB in 1995, many of whom took part in the hunger strikes.

For the past few months, they had been negotiating for an Asian American Studies program at Northwestern. As one of the 25 percent of Asian-Americans in her freshmen class, Pendakur felt that such a program that would seek to present the history, cultural contributions, and issues of Asian-Americans was only necessary.

Pendakur had grown up in Evanston, IL, where she said was mostly 'black and white' in the 1990s. In Northwestern, she found herself embracing her Indian-American identity first by joining LOTUS, a student advocacy group for South Asians, and then participating in Asian American Advisory Board's (AAAB) political activities on campus. THere, she found that her desire to learn more about her own identity was shared by her fellow classmates. A few of them had been teaching student-led seminars on Asian-American Studies for the past few years and with the class hitting full capacity, they felt that it was time to get a more permanent program going.

In early February, the AAAB, the student advisory board dealing with advocacy for the Asian-American population on campus, wrote up their own 200-page proposal for an Asian American studies program, which included plans to hire five professors and a program director. In this proposal, they explained the importance of Asian American studies. 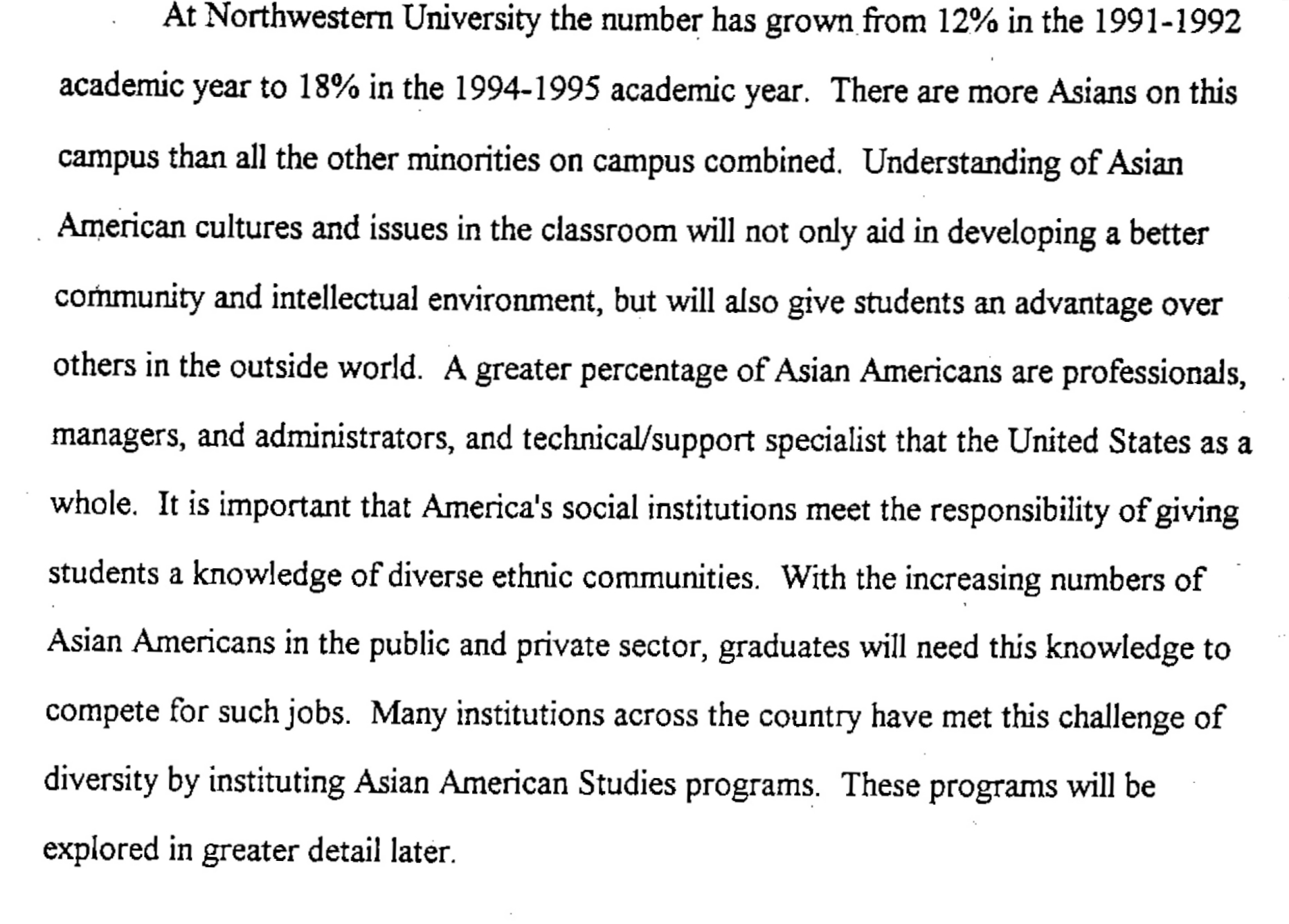 This proposal garnered several letters of faculty support and over 1200 student signatures. 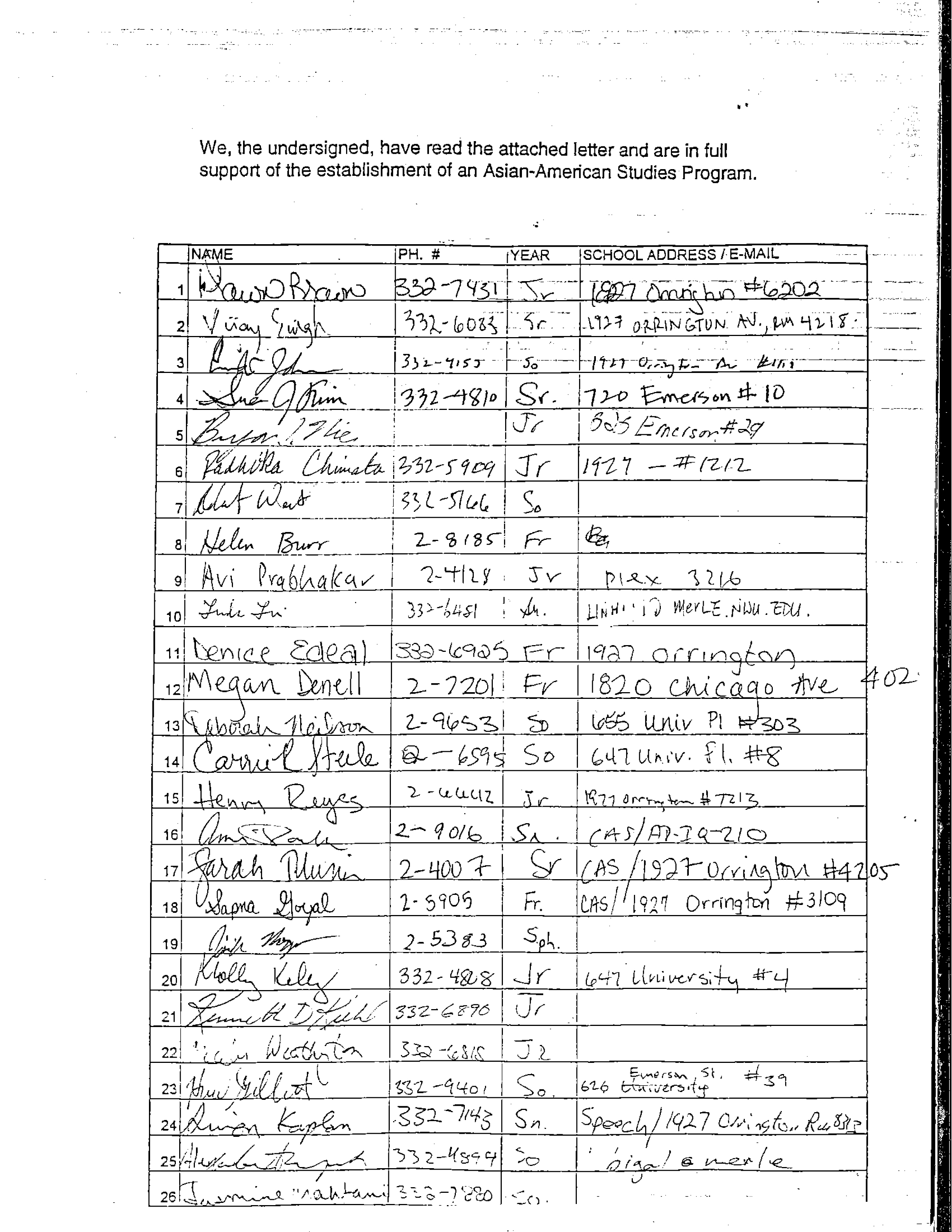 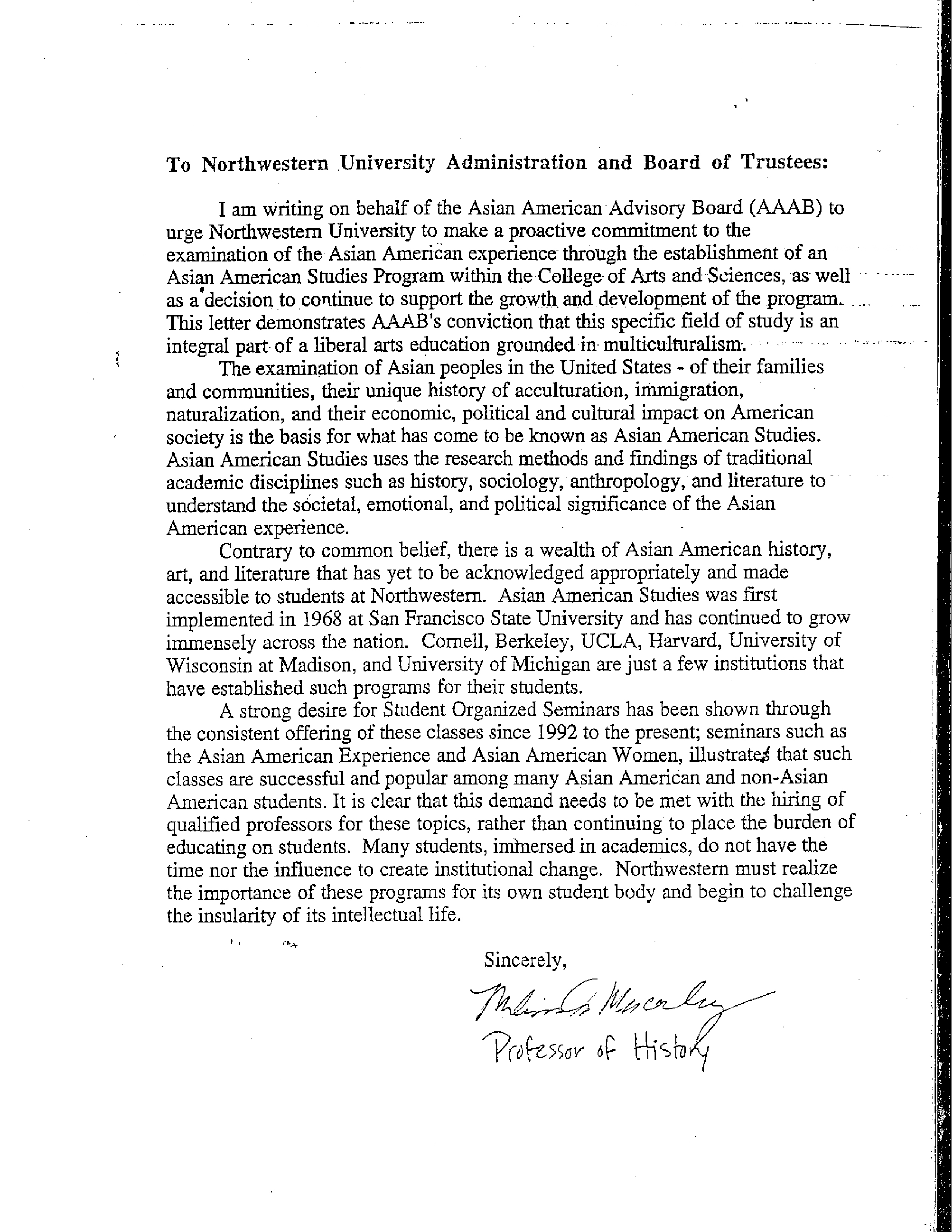 However, the response was less than what Pendakur and the AAAB had hoped for. Although Henry Bienen, then the president of Northwestern University, admitted that the cost of the proposed program were not prohibitive, he rejected every single point of the AAAB's proposal. He acknowledged that there was a need and demand for the program but refused to commit to any action to demonstrate an intent to implement one.

Let me assure you as I assured the students with whom I met: I am not against this program. I have an open mind about it. I am against arbitrary deadlines to do this or that. Henry Bienen, in a letter dated February 14, 1995 to Robert Yap

Again attempting to compromise, the AAAB revised their plan, asking for only two tenure-track professors and a director for an Asian American studies program. The administration countered with proposals for visiting lecturers and temporary programs. The students felt like they were getting nowhere and that the administration was simply stalling for time and waiting for them to graduate so that their demands could be quietly swept under the carpet.

So on April 12th, they decided to fight.

At a rally of 300 students held to protest the administration's latest refusal to consider proposals, they announced the beginning of a hunger strike.

This timeline summarizes what happened during this explosive incident in Northwestern University. By clicking the pink buttons, you will be able to filter the key events by the major actors.

Professor Jinah Kim, now a professor at the Asian American Studies Program, was herself involved in the hunger strikes as an undergraduate in Columbia University. Here, she shares her experiences.

But that was not all. Students at more and more universities began advocating for ethnic studies and refused to yield to the conservative statism of their administrations. For the first time, they began to take action to make their case and voices heard. Following Northwestern's steps, Princeton students organized a sit-in and protest for Asian American and Latino Studies during April 20th to 21st, before Northwestern's hunger strike had even ended.

A year after Northwestern's hunger strike in April 1996, as the student population at Columbia University in New York grew more diverse, four Columbia students pitched a tent in the middle of campus and began a hunger strike, demanding the establishment of an ethnic studies department.

The hunger strikers of 1995 scored a minor victory with the four promised Asian American classes. However, progress from there happened at a slow pace. In May 1996, Northwestern faculty voted to add an Asian American studies program to the curriculum but only chose to make it a small cluster of interdisciplinary courses rather than an academic minor and major. After the 1995 strike, it would take four years and more intense lobbying in order for the Asian American Studies Program to be finally established at Northwestern in 1999 as a minor in WCAS with two core faculty members. 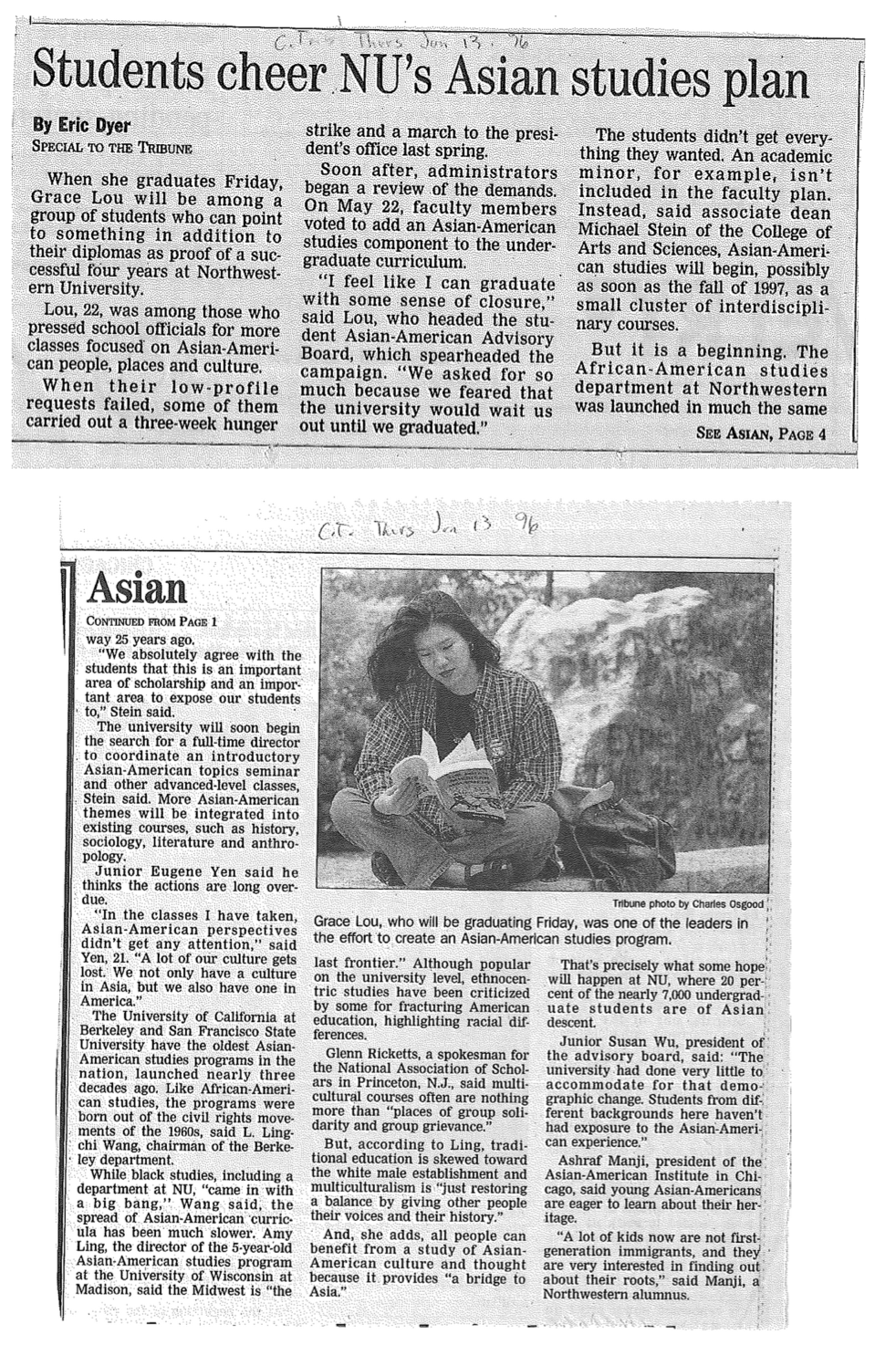 In June 2001, the first AAS minor graduates were Tammy Leung and Vishal Vaid. None of the original hunger strikers ever got to take courses under this academic minor but as seen in this Daily Northwestern article, their actions had influenced later generations personally and profoundly. 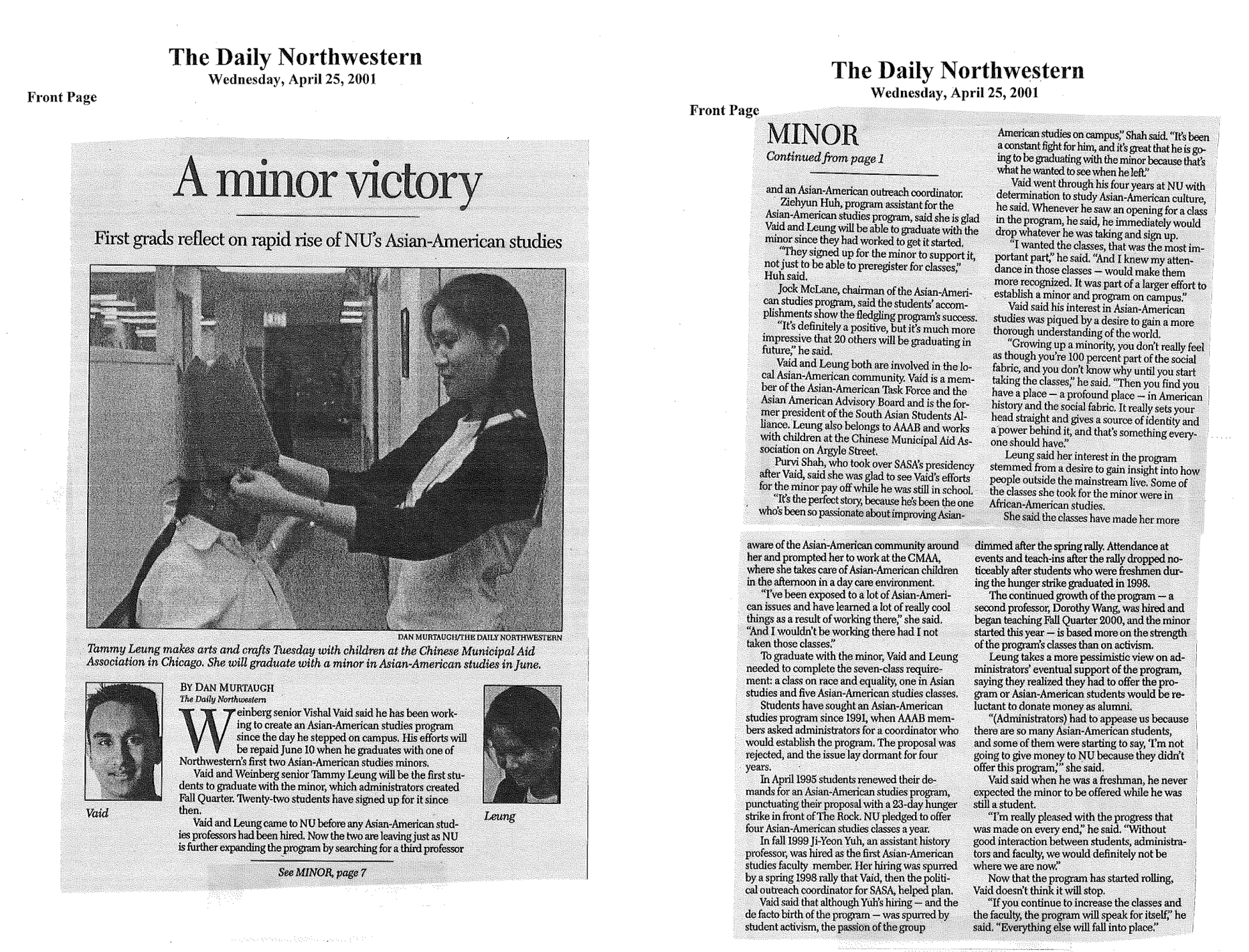 We are not revolutionaries. We are not a bunch of rabble-rousing loose cannons. We are students. Students who ask for nothing more than a right to learn. AAAB in a statement quoted by the Chicago Tribune on April 24, 1996

In this video, Prof. Kim speaks about the impact Asian American Studies has had on her students as well as on her professional career.

The hunger strike was not just asking for the establishment of a curriculum. The hunger strikers were also asking for the university's recognition of their culture and their ethnic group on campus. By building strong relationships with student leaders outside the Asian American community, students were able to build and lead this multicultural coalition to protest for diversity on behalf of the AAAB and the Asian American community.

Noting that the Asian-American students had received support from white, black, and hispanic classmates and student organizations, Jennifer Taniguchi, one of the original hunger strikers, said, "The struggle is to make the administration responsive to the concerns of all students." Therefore, the strike serves as an example of great cross-cultural collaboration on a scale not oft seen on this campus, although student leaders of cultural groups recognize the merits of working together.

In 2012, a group of Northwestern students started the Asian NU Project in order to bring together Northwestern's Asian community and to empower students to be proud of their identities. Many students in this project revisited the Asian American hunger strikes in 1995, seeing themselves as part of a long lineage of such student activism almost a decade ago.